INSPIRING Indian film Kaun Pravin Tambe premiered on streaming site Hotstar on April 1 and tells the real-life story of a cricketer who achieved his sporting dream late in life.

This will be followed by the big-budget Bollywood drama Jersey, which is a remake of a 2019 Telugu-language film of the same name and hits cinemas on April 14. The sports drama starring Shahid Kapoor, Mrunal Thakur and Pankaj Kapur revolves around a down-and-out lucky man who rekindles his dream of playing cricket after making a promise to his son. eastern eye has prepared a watchlist of 12 best Indian cricket-themed movies in chronological order.

Lagaan (2001): Bollywood’s greatest sports film sees Aamir Khan play a simple man who leads villagers to learn cricket and takes on British soldiers in a high-stakes match. The Oscar-nominated period film has all the drama and tension of a sports game, including a grand finale.

Iqbal (2005): The mind-blowing sports drama sees Shreyas Talpade play an impoverished deaf-mute boy, who dreams of playing cricket for India. The inspiring story sees him helped by a failed former cricketer and his sister.

Chennai 600028 (2007): The Tamil-language sports comedy was a sleeper superhit when it was released and spawned a successful sequel in 2016, as well as a host of remakes. The story of street cricket deals with themes of friendship and rivalry, against the backdrop of an important tournament.

Jannat (2008): There’s no doubt that cricket is a beautiful game, but this crime drama leans into the ugly side of the sport and revolves around illegal match-fixing. Emraan Hashmi plays the ambitious young man who gets in over his head and sees his life spiral out of control.

99 (2009): This low-budget crime comedy may not have received the attention it deserved when it was released. The 1999 comedy with a cricketing backdrop revolves around two petty crooks who get on the wrong side of a bookie and it sets off a series of unexpected events.

Ferrari Ki Sawaari (2012): The best cricket comedy is this fantastic father-son film full of laughs and full of emotions. Sharman Joshi plays a devoted father who will do anything to help his son get a cricket scholarship, including stealing Sachin Tendulkar’s Ferrari.

MS Dhoni: the untold story (2016): Perhaps the best cricket biopic ever made sees Sushant Singh Rajput portray iconic wicketkeeper/batsman Mahendra Singh Dhoni. The award-winning film traces his journey from a simple start to winning the World Cup for his country.

Kana (2018): The Tamil-language sports drama sees Aishwarya Rajesh play a farmer’s daughter who aspires to become an international cricketer. The inspiring film traces his journey from an impossible dream to becoming a reality. The actress would reprise her role for the equally moving Telugu remake Kousalya Krishnamurthy (2019).

majili (2019): The Telugu-language romantic sports drama starring Naga Chaitanya and Samantha Ruth Prabhu is based on a dance-led film Sagara Sangamam (1983) but uses cricket as a central theme. It revolves around an aspiring cricketer who
gives up after being heartbroken and given a second chance by helping a young girl achieve her cricketing dream.

The Zoya Factor (2019): The romantic comedy based on the 2008 novel of the same name has plenty of entertaining moments. The story revolves around an Indian cricket captain, played by Dulquer Salmaan, and an unlucky publicist (Sonam Kapoor), who inadvertently becomes a lucky charm for the national team.

Cricket documentaries with an Indian connection:

Beyond all borders (2013): Kunal Nayyar narrated a film about three very different Indians with a strong connection to cricket. 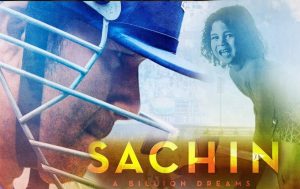 Death of a gentleman (2015): Documentary detailing how certain countries took control of cricket for financial gain, at the expense of other nations.

Sachin: A Billion Dreams (2017): Film charting the inspiring rise of the greatest Indian sportsman of all time, Sachin Tendulkar, from his childhood to become a world icon of cricket.

The Lion’s Roar (2019): Documentary series about the return of Indian Premier League side Chennai Super Kings after a two-year ban.

Previous Which of these South Indian cybercrime movies have you watched?
Next Government to launch digital games research initiative to promote and popularize Indian culture